CALGARY — As oil prices crash 31% worldwide and the Dow drops more than 2,000 points over Coronavirus fears, oil industry experts are working hard on a way to blame all of this on recent Wet’suwet’en protests.

“We feel confident that this worldwide oil crisis, and any decisions it causes us to make about investments in the Alberta oil sector, are definitely the fault of a handful of Indigenous protests,” explained Russ Haverforth, chair of the Alberta-based think tank Oil-Based Solutions.

“Until we’ve worked out exactly how that is, we’d appreciate it if all Canadians continued to take our word for it,” Haverforth added, before returning to the OBS brainstorming session.

Western energy stakeholders are working around the clock to come up with reasons why everything going wrong is because of the railway blockades, and not because of decades of Alberta refusing to diversify its industries away from oil. Speaking from his government’s $30-million “energy war room”, Alberta premier Jason Kenney was blunt.

“We haven’t yet worked out how the Wet’suwet’en managed to travel around the world and crash the global oil markets,” Kenney mused. “But we’re confident they did. Perhaps they’re also to blame for the worldwide Coronavirus pandemic? That’s good, write that down.”

Kenney additionally suggested that the Wet’suwet’en, as opposed to volatile worldwide oil markets, are to blame for Teck Resources cancelling a $20 billion oilsands project. He then went on to suggest they are also “directly, probably responsible” for Brexit, the Mount Merapi volcano eruption, Harry and Meghan leaving the UK, Andrew Scheer stealing that money for his kids private school, and the new James Bond movie getting delayed.

Showing support for efforts to figure out how the Wet’suwet’en are behind everything, Conservative leadership frontrunner Peter MacKay weighed in. Reached for comment at a campaign stop, MacKay insisted, “I’m calling on protestors to end the blockades, and also to stop getting Saudi Arabia to manipulate oil prices in order to exert their power over the global economy and improve their position against Iran for who will have the most influence in the Middle East.”

Upon hearing about expert efforts to explain how domestic Indigenous protestors begat the global oil price crash, President Trump joined in tweeting about the issue: 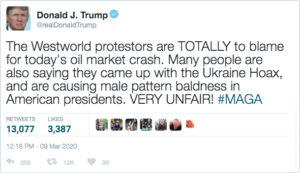 At press time the Alberta government has also rejected calls for economic diversification in favour of its new human sacrifice plan.