WASHINGTON — After calling for airstrikes on three government sites in Syria, President Trump is reportedly most excited about the prospect of denying refugee status to the untold Syrian civilians he will undoubtedly unsettle.

The missile strikes come after a suspected chemical attack perpetrated by Syrian president Bashar al-Assad against his own people, followed by a week of Trump angrily tweeting threats. The president’s delay was reportedly so that he could clear his schedule, in order to view the faces of Syrians refugees as he personally denies their applications for refugee status.

President Trump’s hands-on cancelling of Syrian refugee claims will mark the longest period as president he has gone without going on vacation to play golf.

“I wouldn’t say he’s joyful, because I’m not sure that’s an emotion he’s capable of,” reported one anonymous White House staffer. “But he’s definitely giddy about the prospect of barring Syrians who are fleeing his war from his own country. He described it as ‘get them coming, and get them going.’”

“Oh, and do you know anyone who’s hiring?” asked the staffer.

While many have criticized Trump’s airstrikes as a transparent move to distract from the criminal investigation of his personal attorney, White House insiders insist the move comes solely from a desire to “stick it to desperate Syrian refugees”.

“The president has made it very clear, his missile strikes are solely intended to send Syrian people fleeing straight into his Muslim travel ban,” explained White House press secretary Sarah Huckabee Sanders. “The refugees will then crash into the ban, like Wyle E. Coyote smashing into a tunnel painted on the side of a mountain.”

Huckabee continued, “the president will watch this on TV from bed, as he live-tweets jokes at the refugees’ expense. No further questions.”

The president took to twitter to explain his rationale: 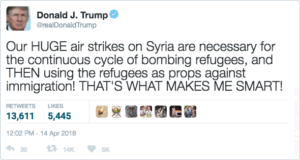 According to sources, Trump has received assurances from Russian president Vladimir Putin that he will be happy to help create as many refugees as Trump needs.